From Emergency Planning to Planning for Retirement 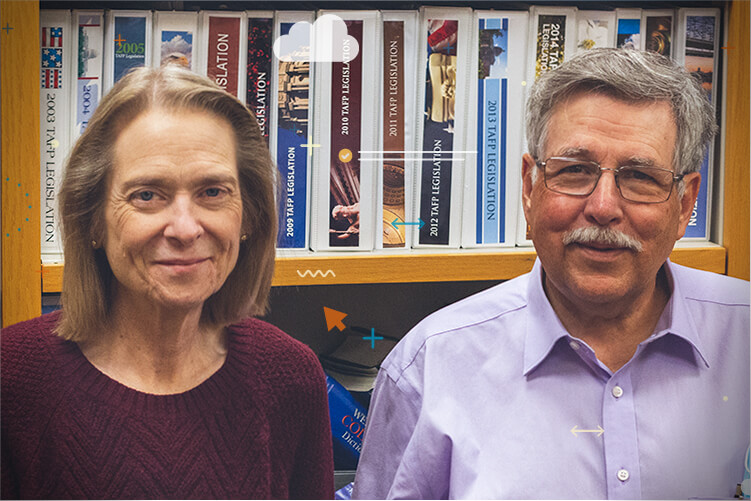 Brenda and her partner Bob in the MOSERS Library

The summer of ’79 would be the start of a long career for Brenda Heidbreder. What started as a part-time position fresh out of college, turned into a lifetime of memories and achievements with the State Emergency Management Agency (SEMA), formerly known as the Disaster Planning and Operations Office.

The communications team at MOSERS had the privilege of sitting down with Brenda in late December 2021. As we sat in the library of the MOSERS office, Brenda’s bright smile and calming nature, accompanied with the kindness of her partner, Bob Henley, who is also a former Missouri state employee, immediately drew us into her story.

Prior to her retirement, Brenda Heidbreder was the longest serving, living employee of the Missouri Department of Public Safety. When she retired, there were only 63 active Missouri state employees (out of 42,363) who had more service than her.

With her 42 years and 5 months of service, Brenda truly has seen it all. From some of the worst natural disasters in Missouri history to witnessing the beauty of communities coming together in times of distress.

“I couldn’t have gotten into a better dream job. There was never a dull moment,” she explained. “It was such interesting work, and we are an agency that got to help people and help them succeed,” Brenda described.

Though Brenda spent most of her days preparing for worst case scenarios, she didn’t let that overwhelm her everyday life. However, that is not to say that she didn’t pick up a few emergency planning tips along the way. Brenda smiled and jokingly said, “I don’t own a house but, I always thought if I ever do, I know exactly where NOT to buy.”

Throughout her time at SEMA, Brenda had the opportunity to work with many different agencies and organizations across the state, planning for possible disasters. “I don’t feel like I was ever confined at my desk with one job,” she explained. Brenda enjoyed traveling to every nook of Missouri and believes she likely now knows at least one person in every county, especially the names of who to call in an emergency.

According to the Missouri State Emergency Management Agency, Brenda was the first woman to obtain the position of Nuclear Civil Protection Planner. When she first started in her position, there were no computers, only electric typewriters. The agency was on call 24/7 and would take turns, a week at a time, on call.

Brenda recalled the time she got the call on December 15, 2005. The Taum Sauk Dam in Southeast Missouri had failed and destroyed 281 acres of Johnson’s Shut-Ins State Park, ripping the superintendent’s home from its base. Because she was on call at the time, Brenda was the first from her organization that day to begin working on the case. “I actually took the call for Taum Sauk Dam. I just couldn’t believe that had happened.” This was just one of many phone calls she would receive regarding disasters within the state throughout her career.

Many came and went over the years, but Brenda had the unique opportunity of watching the agency grow and change. She let out a smile when she explained to us that, at the office. “They kind of called me the historian. They would come to me and say, well, what did you all do in the past?” Her vast knowledge of historic disasters and planning allowed her to bring her co-workers up to speed about how the agency had responded over the years. Elizabeth Weyrauch worked with Brenda for nearly six years at the Department of Public Safety and was her supervisor for her last three years leading up to retirement. Elizabeth explained, “Brenda took time to teach newer people so that institutional knowledge would live on.  She even planned her retirement date around a big annual project.” Elizabeth added, “I wish Brenda a long, healthy, and happy life doing the things she loves."

Brenda Heidbreder early in her career at SEMA

Now, Brenda is looking to the future and making plans for her retirement. When asked why she decided to finally retire, her answer was simple, “I knew it was time and I know they'll find good people to do the work I did, and I always think it's nice to see young people come in with new ideas, you know.”

Brenda now has big dreams of traveling throughout her retirement, saying, “My bucket list is to do a cruise of the Mediterranean.” She also wants to work on her golf game and take up crocheting.

During our time with Brenda, her partner Bob, continually looked upon Brenda with admiration. He added, “Brenda is not going to brag about herself but… she is going to be sorely missed.”

When asked what she will miss most, her answer was simple, “I’m going to miss the people most of all.” She added, “I got to know a lot of people within the state agencies while planning.”

Brenda’s career is exceptional. Her dedication to the State of Missouri is admirable and her legacy will live on for many years to come.